Fast processes on the Sun require instruments capable of acquiring data in a time span comparable to the evolution time-scale of solar features, which is on the order of minutes and sometimes even on the order of seconds. Imaging spectropolarimetry with the GFPI (Puschmann et al. 2012, 2013) is ideally suited for this type of application. The instrument comprises two tunable etalons in collimated mounting, which provide a spectral resolution of ℜ ≈ 250.000. Scanning a spectral line takes a few tens of seconds to from a few minutes depending on the sampling, the number of images acquired per wavelength position, and the observing mode (spectroscopy vs. polarimetry). Two cameras with 1376 × 1024 pixel acquire images strictly simultaneously in the narrow- and broad-band channels to facilitate post-facto image restoration including simple destretching, speckle masking imaging and deconvolution, and multi-object mult-frame blind deconvolution (MOMFBD). The field-of-view (FOV) is 50″ × 38″ in the spectroscopic observing mode and about half the size for polarimetric observations. Small sunspots and substantial portions of active regions can thus be observed. The coatings of the etalons are optimized for the wavelength range 530–860 nm, while the polarimeter limits the spectral observing window to 580–660 nm. Many interesting photospheric and chromospheric spectral lines are accessible, and two of them can be observed sequentially.

All GFPI data (i.e., raw data and high-level data products) are stored in the GREGOR archive at AIP, where they can be accessed and queried on this website after registration. New data is embargoed for one year or two years in case of PhD theses. 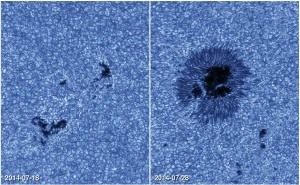 ng provides important context information for the  GFPI observations. Small-scale magnetic features are more more easily detected in particular wavelength regions, e.g., the Fraunhofer G-band. Furthermore, the broad Calcium H and K lines offer chromospheric diagnostics.  Two CCD cameras (pco.4000 and pco.sensicam) were used in the BIC of the GFPI depending on the availability of the GREGOR/VTT facility cameras until the end of 2015. Three interference filters (Ca II H λ396.8 nm, G-band λ430.7 nm, and blue continuum λ450.8 nm) are available. Recently, MPS contributed a 0.1-nanometer-wide Ca II H λ396.8 nm interference filter of the Sunrise mission. The maximum FOV of the pco.4000 CCD cameras is limited to 75″ × 93″ (2160 × 2672 pixel) because of dichroic pentaprism splitting the light between GFPI and BIC. The FOV of the pco.sensicam CCD camera is much smaller 34″ × 26″ (1376 × 1040 pixel) but the data acquisition rate is much higher (eight vs. three frames per second). However, in both cases post-facto image restoration is feasible (Knox-Thompson, speckle masking imaging, and multi-frame blind deconvolution).

All BIC data (i.e., raw data and high-level data products) are stored in the GREGOR archive at AIP, where they can be accessed and queried on this website after registration. New data is embargoed for one year or two years in case of PhD theses. 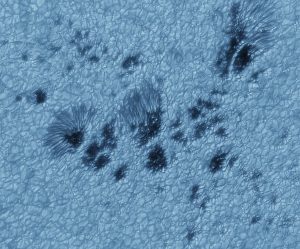 In early 2016, we installed HiFI at the GREGOR solar telescope,  where it resides in the blue imaging channel of the GFPI , which is fed by a dichroic beamsplitter with a cut-off at λ530 nm. Two Imager sCMOS cameras from LaVision replaced older PCO.4000 and PCO.sensicam facility cameras. The new sCMOS detectors are synchronized by a programmable timing unit and record time-series suitable for image restoration either separately for each channel or making use of both channels at the same time. The exposure time is usually a few milliseconds. Different count rates in both channels are balanced by choosing suitable neutral density filters. Short exposure times are essential to freeze the wavefront aberrations in a single exposure. The  2560×2160-pixel images with a FOV of 64.8″ × 54.6″ are digitized as 16-bit integers and recorded with a data acquisition rate of almost 50 Hz. Thus, the image scale is about 0.025″ pixel-1 or about 20 km on the solar surface at the disk center. The diffraction-limited resolution of the GREGOR telescope with a diameter D = 1.5 m at a wavelength λ = 400 nm is α = λ / D = 0.055″. According to the Nyquist sampling theorem, HiFI images are critically sampled at the shortest wavelength of the standard interference filters. A solar feature moving at 1 km s-1 traverses a pixel in little over 20 s. In the standard observing mode, sets of 2 × 500 images are continuously written to a RAID-0 array of SSDs at a cadence below 20 s. The imaging system has achieved a sustained write speed of up to 660 MB s-1. To limit the final data storage requirements, only the best 2 × 100 images of a set are kept for image restoration and further data analysis.

All HiFI data (i.e., raw data and high-level data products) are stored in the GREGOR archive at AIP, where they can be accessed and queried on this website after registration. New data is embargoed for one year or two years in case of PhD theses. 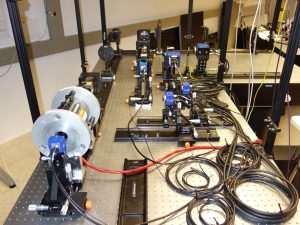 Please contact the instrument PI for an introduction to HiFI+, training with the data acquisition, and installation of the data reduction pipeline. A data reduction pipeline for Level 1 data is available on site, and the PIs of observing campaigns are expected to reduce their data for archiving. The data pipeline also provides provisions for image restoration. However, only a very limited number of images can be restored on-site.

All HiFI+ data (i.e., raw data and high-level data products) are stored in the GREGOR archive at AIP, where they can be accessed and queried on this website after registration. New data is embargoed for one year or two years in case of PhD theses. 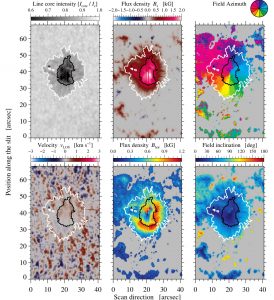 One of the main aims of the GREGOR telescope is to measure the photospheric and chromospheric magnetic field vector with high spatial resolution. GRIS operates in the spectral range 1.0–2.3 μm (1.0–1.8 μm in spectropolarimetric mode). It therefore covers two of the most widely used spectral regions for spectropolarimetric observations, the λ1083 nm and the λ1565 nm regions. The length of the slit corresponds to 180″ on the solar surface, or 130″ when using the whole chip of the infrared camera for standard spectroscopic observations and 65″ in spectropolarimetric mode. The FOV surrounding the slit is reflected back and used as a slit-jaw imaging system. The Tenerife Infrared Polarimeter (TIP-II, Collados et al. 2008), operated with GRIS, will improve the theoretical spatial resolution of TIP-II at the VTT by a factor of two. It is located immediately after the slit. The polarizing beamsplitter from TIP-II produces two images of the slit that are linearly polarized at ±45°. After the light passes through the grating and is dispersed, several mirrors guide its way into the reimaging optics which finally project the light on the detector. The image scale at the final focal plane is 0.13″ pixel-1.

The GRIS data are publicly available at the Data Archive for the GREGOR Infrared Spectrograph, which is hosted at the Kiepenheuer Institute for Solar Physics in Freiburg.

Located on a separate optical table, BBI  (von der Lühe et al. 2012) has access to the full spectral range provided by the GREGOR solar telescope, which is only limited by the spectral sensitivity of the detector. Thus, a broad selection of interference filters, e.g., λ397 nm, λ430 nm, λ486 nm, λ656 nm, λ709 nm, and λ777 nm, can be used with the BBI. As in BIC and HiFI two PCO facility cameras are used in BBI, and the maximum FOV is 102″ × 68″ with the pco.4000 cameras. The second channel of BBI can be configured in the »Foucault« moide, where the telescope’s pupil is imaged on the detector. Placing a small slit at the science focal plane, while observing a the solar limb, delivers images, where aberrations appears as intenisty fluctuations. Thus, BBI serves two purposes as a wide-field imager and as a device to measure and evaluate the performance of telescope and adaptive optics system.

ZIMPOL-3 is a single-beam polarimeter, which is designed for high-polarimetric resolution in solar observations (Bianda et al. 2013). The polarimetric resolution, down to few 10-5, allows to investigate scientific domains that would be unreachable without these sensitivity. ZIMPOL-3 is used with GRIS, where the modulator is placed before the entrance slit and the demodulation occurs on-chip by shifting the charges on a masked CCD chip, which is synchronized with the modulator. This non-standard observing mode is only available on demand and in close callboration with the PI institue. However, it serves as a good example for joint observing programs and collaborations beyond the immediate members of the GREGOR consortium.