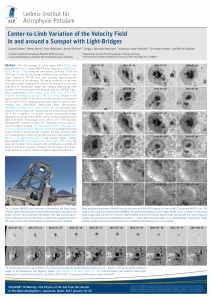 Initial results obtained with the GREGOR Fabry-Pérot Interferometer (GFPI) during the »early science phase« with the GREGOR solar telescope were presented as a poster at the SOLARNET IV Meeting »The Physics of the Sun from the Interior to the Outer Atmosphere«, Lanzarote, Spain, 2017 January 16–20.

The disk passage of active region NOAA 12121 was observed with the 1.5-meter GREGOR solar telescope (Schmidt et al. 2012, AN 333, 796) during the time period 2014 July 22–30. On 2014 July 25 and 28, the seeing conditions were excellent so that longer time-series (30–90 min) were recorded approaching the diffraction limit of the telescope. The seeing conditions on the other days were variable ranging from mediocre to very good so that only snap-shots of high-quality images and imaging spectroscopy were possible. On each day, data were acquired with the GREGOR Fabry-Pérot Interferometer (GFPI, Denker et al. 2010, Proc. SPIE 7735, 77356M; Puschmann et al. 2012, AN 333, 880), initially in the spectral line Fe I λ630.15 nm and on the last two days in the spectral line Fe I λ617.34 nm. Imaging spectroscopy based on spectral scans restored with Multi-Object Multi-Frame Blind Deconvolution (MOMFBD, van Noort et al. 2005, SoPh 228, 191) delivered high-resolution line-of-sight (LOS) velocity maps for a field-of-view (FOV) of 50″ × 38″. In addition,  we  present  speckle  reconstructed images obtained with a G-band filter (λ430.7 nm) in the Blue Imaging Channel (BIC) of the GFPI. These images cover a FOV of 75″ × 93″ and were obtained with a cadence of about 30 s. These data serve as input for Local Correlation Tracking (LCT, November & Simon 1988, ApJ 333, 427; Verma & Denker 2011, A&A 529, A153) to investigate horizontal proper motions in and around the sunspots. The high-resolutions data are complemented by data from the Solar Dynamics Observatory (SDO, Pesnell et al. 2012, SoPh 275, 3) and Interface Region Imaging  Spectrograph (IRIS, de Pontieu et al. 2014, SoPh 289, 2733). We study the evolution of the sunspots with an emphasis on growth and decay of individual sunspots, formation and dissolving of (rudimentary) penumbrae, and fine structure of light-bridges and umbral dots.

Poster Presentation of »sTools« at the IAUS 327 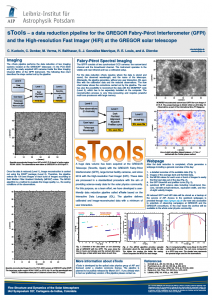 The Optical Solar Physics group from AIP presented the data reduction pipeline »sTools« at the IAU Symposium 327: »Fine Structure and Dynamics of the Solar Atmosphere« (October 9-14, 2016).

During the »Early Science Phase« of the 1.5-meter GREGOR telescope in 2014 and 2015, a huge data volume has been acquired with the GREGOR Fabry-Pérot Interferometer (GFPI), large-format facility cameras, and since 2016 with the High-resolution Fast Imager (HiFI). These data are processed in a standardized procedure with the aim of providing science-ready data for the solar physics community. For this purpose, we have developed a user-friendly data reduction pipeline called »sTools« based on the Interactive Data Language (IDL). The pipeline delivers reduced and image-reconstructed data with a minimum of user interaction. Furthermore, quick-look data are being generated, as well as a webpage with an overview of the observations and their statistics. The webpage can be found under the »Observations« tab on this website.

All the processed data are stored online at the GREGOR GFPI and HiFI data archive of the Leibniz Institute for Astrophysics Potsdam (AIP). In the poster we described the basic principles of the pipeline and presented selected high-resolution spectral scans and images processed with sTools and acquired with the GFPI and HiFI instruments. sTools is under constant development and will be freely available in 2017. The pipeline is licensed under a creative commons license.  A proceeding with more information will be published soon by Cambridge University Press.